Welcome to the wonderful world of tabletop roleplaying games! In this unit, you'll learn the basics of how these games work, and use a simple system called Lasers and Feelings so that you and your friends can bring your own tabletop world to life!

This page requires you to be logged in to access it. Please login and try again.
15 mins
What is a tabletop RPG?
Introduction

As far as forms of entertainment go, tabletop role-playing games are fairly new, originating in the 1970s with games like 1974's original edition of Dungeons and Dragons, and 1977's Traveller. For many years, these games were kept within the deepest confines of nerd culture, but in recent times, this hobby has exploded into the mainstream. Exposure on TV shows such as The Big Bang Theory and Stranger Things, as well as the rise of actual-play shows like Critical Role and The Adventure Zone, has brought us to today, where tabletop RPGs aren't just for nerds, and are a much more open and inclusive hobby.

So, how do they work? In essence, a TTRPG is an asymmetric experience, where one player is the Game Master (GM), and everyone else plays characters in a world of the GM's creation. Outcomes of situations are determined through a mix of role-play and rolling dice. If you say the right things and roll well, good things will happen. If you don't... well, you're at the mercy of the GM then.

15 mins
Why are they cool?
Just trust me on this one

Tabletop RPGs can seem a little scary at first. I get it; character sheets are big and complicated and scary, and coming up with a personality and playing a character is nerve-wracking for newer players. It doesn't have to be that way, though! A lot of RPG systems, including the one I'll be introducing you to today, have very simple character creation systems, and easy frameworks around which you can build up a personality for your character. Tabletop RPGs, once you get into them, can be a great way to have fun with your friends or connect with new people! If you're a fan of stories, there's nothing quite like being able to craft a whole new world, or to explore your own destiny within that world. It's a great way to stop being passive about your entertainment and start creating. In the end, it's just a good time.

60 mins
Lasers and Feelings
(and its various hacks)

Earlier, I alluded to a simple RPG system that I would use to ease you into the world of tabletop RPGs. It would be absurd of me to start you off with a complicated system like D&D 5th Edition, after all! Without further ado, welcome to Lasers and Feelings! 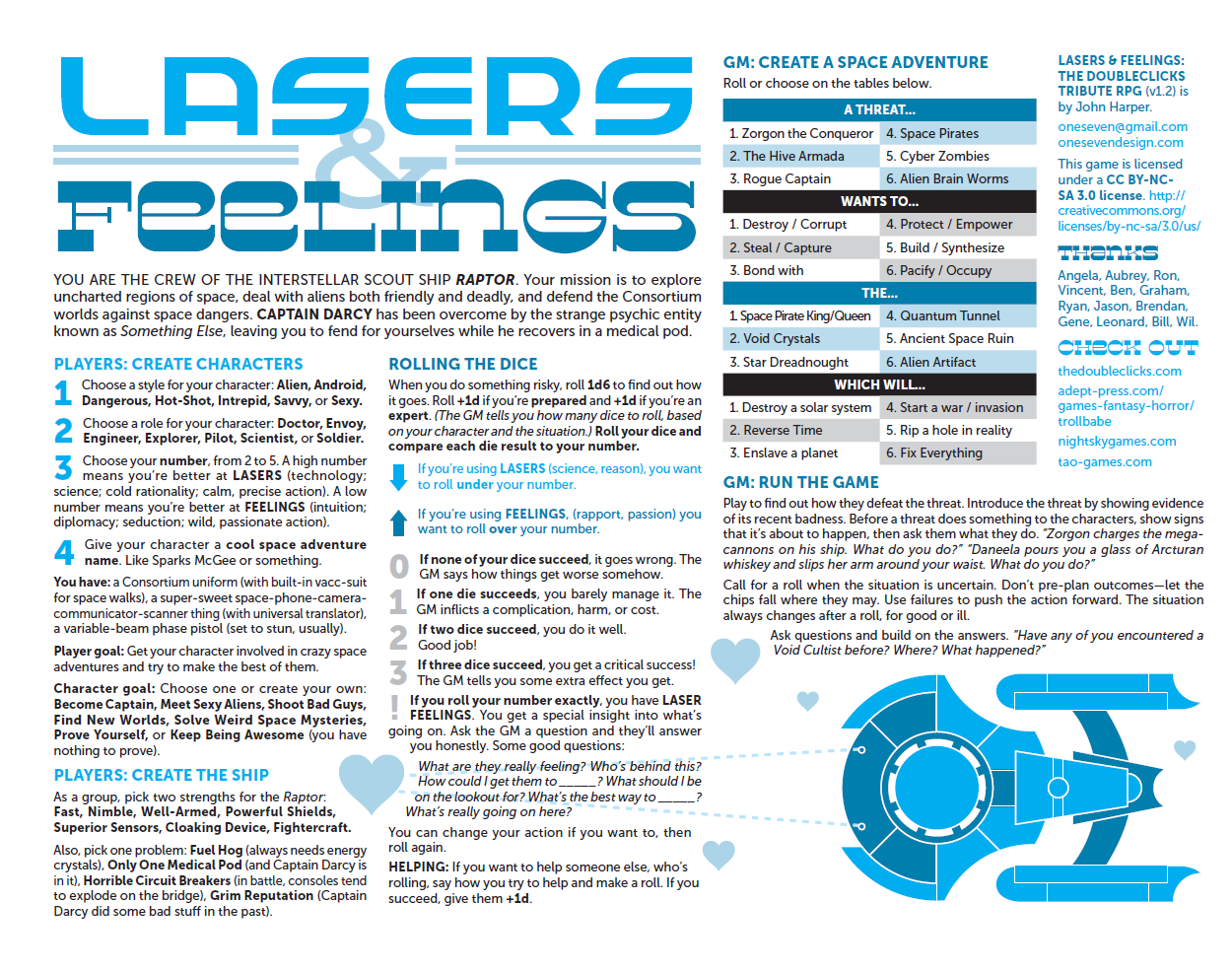 To help with getting the numbers you want, certain things will allow you to roll more dice. You get to roll an extra dice if you're prepared, and another if you're an expert. You get different levels of success depending on how many dice succeed, and a special effect if you get your exact number, as detailed in the image.

To make things simpler for both GMs and players, Lasers and Feelings allows and sometimes even encourages you to roll for attributes related to character and story, instead of having to come up with them yourself. This allows you to come up with some truly wild characters and stories.

Another advantage of Lasers and Feelings is that it is published under a Creative Commons licence, which means it can be shared and modified freely. As such, if you don't feel like doing a space adventure, there are numerous hacks of the game that use the same basic rules. You can go looking for them online, but I've also collected some of the best ones in this Google folder. The selection on offer is...

Side note: some of these have slight typos on their sheets - in all cases, you should be picking a number between 2 and 5. These games all work on the same basic framework as L&F though, and you should start to recognise patterns in how they're designed.

Now, it's time to hand things over to you and your friends. To finish this unit, you have a couple of options. Discuss both of these with your teacher. First, familiarise yourself with Lasers and Feelings or one of its hacks, and choose one person to be the GM. They have arguably the hardest job, as they have to run the game and keep everything in order. All the other players should create characters and get ready to roleplay. Once you're ready, perform the following steps.

If your teacher is okay with it, the best thing to do would be to record yourselves playing the game. Aim to play and record for about 60 minutes, and make sure that the audio quality is good before you start.

Alternatively, if time constraints for your teacher are an issue, record a group reflection after you've played, around 5 to 10 minutes long. Discuss what you enjoyed about the game, what went well, and what you could have done differently.

Once you've got a finished recording, upload it to Gibbon as your evidence, and you'll have completed this unit!